Please enable JavaScript in your browser settings.
Fullscreen MapMap Show Current LocationMy Location Get DirectionsDirections
The Atlantic Marine Railway Company of Red Hook, Brooklyn, makes the first-of-its-kind hospital ship in 1859. They converted FALCON, an old steamer, for the New York Quarantine Commissioners - who sought to keep infectious cholera and yellow fever at bay. FALCON was first to respond when cholera came to NYC in 1866, although not without controversy.

Epidemics, New York in the mid-1800s knew them too well. Cholera was one of the city's biggest killers. The ports of New York Harbor were the economic engines of the region, but the all important shipping was also how outbreaks spread across the globe. 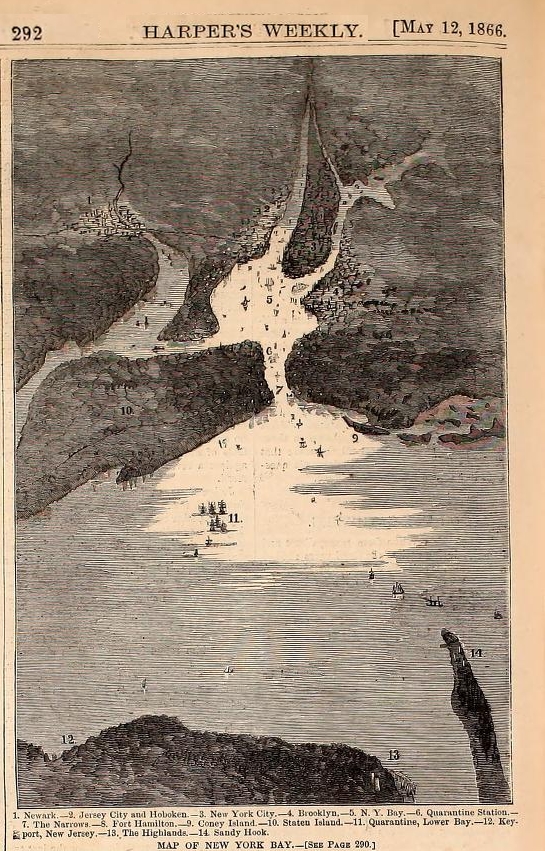 In 1800, a quarantine hospital was established on Staten Island against the wishes of the residents of the island. The hospital seemingly did a poor job of containing infectious diseases as Staten Islanders, from the year it was built, died in epidemics of yellow fever. After years of debate and posturing, it was burnt down in 1858.

New York's Quarintine Commissioners needed a place for a new hospital, but unsurprisingly no one wanted it anywhere near them.  The solution they settled on was to build a floating hospital. The task of converting FALCON, an old steamship, was given to the Atlantic Marine Railway Company, of Red Hook Point, Brooklyn.

The Atlantic Marine Railway company's Red Hook yard was located at the foot of Partition street, now called Coffee Street (according to the Brooklyn City Directory, 1864, published by J. Lain.)

An 1858 article in the New-York Daily Tribune described their shipyard and its new improvements:

The Atlantic Marine Railway Company of South Brooklyn, have recently constructed a new set of 'ways' at their yard at Red Hook, capable of taking up a vessel of the largest size. They have also added some improvements that are entirely new, one of which consists of cradling the vessel in such a manner as to lift her upon the ways in a perfectly horizontal position, the vessel being floated into the cradle, and carried up to her berth without the least strain or wear."

In converting the FALCON to a hospital ship her engines were removed, her deck widened and ventilated accommodations for about 175 patients were built and “the whole neatly painted and plainly, but tastefully fitted up.” (New York Daily Tribune, June 10, 1859).

More of the Story

In 1866, cholera, known to have been raging in other parts of the world arrived in New York.

A scathing article in Harper's Weekly decried that New York was woefully unprepared.  It noted that it was well know that Europe was suffering with the disease and that it was bound to come to New York, so when the emigrant ship VIRGINIA, with 1043 passengers, arrived in the Narrows having reportedly lost 38 people to cholera on it voyage, the hospital ship FALCON should have been ready and waiting for them - but was not.

In portent words the 1866 article in Harper's said that there was no excuse for being unprepared  for epidemics known to come:

"The chief port of the Western continent, after a year's warning, was totally unprepared to deal directly and adequately with the approach of a fearful pestilence. The probabilities were that it would come, as it did come, in an emigrant ship. It was known that such ships are crowded, often with more than a thousand passengers. The most extensive hospital accommodations were the most obvious necessity, and they were not ready. The difficulties may have been many, but there are cases in which difficulties must not be pleaded, and this was one of them."

A copy of the Harper's article can be seen below and a trancription of the text can be found in the CUNY Graduate Center's 2001 on-line exhibit Cholera in Ninteenth Century New York.

Here is the complete text of the New York Daily Tribune, June 10, 1859 article anouncing the hospital ship FALCON and describing its layout:

The Floating Hospital for Quarantine.

The failure of the late Commissioners for the Removal of Quarantine to establish a permanent Quarantine at Seguine's Point, the destruction of the Quarantine buildings at Tompkinsville early in September last, the subsequent expressed determination of the citizens and residents of Staten Island that a Quarantine should not be established or maintained on that Island, and the necessity that a Quarantine be placed somewhere, induced the new Commissioners, appointed in the early part of the current year by Gov. Morgan, to take some steps whereby the objectionable features of the Quarantine might be in a measure be remedied. The principal of these seemed to be the presence of patients suffering under infectious diseases.

The idea of floating hospitals met with much favor from the new Commissioners, and finally was fixed upon as the only plan whereby the infected sick might be safely kept at a distance from the inhabitants of the Island, if other places bordering on our shores. To build hospitals on the shoals of the Horseshoe was deemed impracticable, and as a last and only expedient it was determined to procure hulks, fit them up, and covert them into convenient and permanent receptacles for those sick with infections diseases.

With this object the Quarantine Commissioners purchased the old steamship Falcon, at a cost of $3,500, and arrangements were made with the Atlantic Marine Railway Company, of Red Hook Point, Brooklyn, to fit her up. The superintendence of the fitting up of the vessel was given to Capt. Mark S. Potter, under whose direction she has been thoroughly overhauled, and made in every respect serviceable for a floating hospital.

The work of overhauling her was commenced on the 10th of May last, when she was taken up on the marine railway, the old copper stripped off, the hull recaulked and new copper sheathing put on as far as the 11-feet water-line. The sides and deck were recaulked and the hull rendered as good as it was possible for an old vessel to be made. Indeed, she is now nearly as good as new, The steamer had two decks by covering over the main deck. Her engines were taken out, the hatchways covered over, and the whole ship cleaned and limed.

The main deck is 210 feet long by 30 feet wide. This is covered by a promenade deck 210 feet long by 34 feet wide, eaves projecting on each side 2 feet. The space on the main deck is fitted up in wards. A hall 6 feet wide runs the whole length of this deck, and is lightened up by a skylight 150 feet long by 4 feet wide and 3 feet high., with glass sides and boarded to covered with canvas. There are forty wards or rooms on this deck, the average dimensions of which are 8 feet wide by 10 feet long and 8 feet high. Between the ceilings of these rooms or wards and the upper deck there is a space of 3 ½ inches, running through from the inner edge of the skylight to the outside of of the ship, so as to afford free and open ventilation. The sides are pierced on this deck with openings for windows 2 feet square and about 6 feet apart, giving plenty of light and a free circulation of air. In place of the wheel-houses are side rooms 7 feet long, 8 feet wide, and 7 feet high, making five rooms on each side, which are to be used as nurses apartments, bath rooms and water closets. From these side house there is also an outside passage to a platform to a platform on a a level with the lower deck, and from this platform steps descend to the water. Just forward of amidships on the main deck is a large room 30 feet square, which will be used for a sitting room for patients. Forward of this are the officers' and stewards' rooms, kitchen for the officers of the hospital, dining-room and pantries. Clear forward and open space is left open for the windlass. Here also are the passages to the promenade and lower deck. Clear abaft are two large water closets for the patients and a large room for exercise. Each ward has a door opening upon the main passage. The promenade deck has a railing around it, three feet six inches high.

The lower deck is 170 feet long by 30 feet wide and 8 feet high. This has 40 sliding windows, 2 feet square. The space on this deck is left open fore and aft and intended for iron bedsteads for patients. There is no communication between this deck and the upper one except by means of the outside passages to the side houses before mentioned. Clear forward of this deck is a large room, to be used as a dining room for the patients, and a large kitchen, 30 feet wide by 30 feet long each. On the deck are placed the bilge pumps, for cleaning the hold of water; also force pumps for washing the decks, &c. Below this deck is another which will be used as a store room and for ballast. Clear forward are two large wooden tanks, capable of containing five thousand gallons of water for the use of the hospital ; then there are thirty dead lights in the side of this apartment of the ship.

The carpentry and joiner work is substantially done, the whole neatly painted and plainly, but tastefully fitted up. The joiner work is being done by Jasper Murphy under the direction of Capt. Potter. When completed, the cost of the repairs and fitting up will not be far from $15,000. The masts are left in her and will be used as derricks for the purpose of hoisting supplies and other necessaries in and out of the vessel. There are now about 1000 tons of ballast in the Falcon, When complete she will have accommodations for about 175 patients. There are hawsers fore and aft for the purpose of securely mooring her, and every care will be taken to cause her to maintain as nearly as possible a stationary position. She will be ready to be towed down to her anchorage on the 15th of this month.

The railway on which this vessel was hauled up is very large, and capable of taking up a vessel of twelve hundred tons. The cradle is one hundred and seventy feet long by forty feet wide, and the ground-way six hundred feet long The main chain is seventy fathoms on length, and the iron of the links one inch and seven-eighths thick. This chain was forged in England and cost $1,720. The whole railway cost $31,000 and is operated by a twelve horse power engine,

The furniture necessary for the the accommodation of the sick will be taken from the hospital at Castleton, which is supposed to be ample for the present.

The Quarantine Commissioners are required by the law to provide temporary accommodations for the sick until some place shall have been fixed upon as a permanent location. This floating hospital is intended as an experiment to determine the practicability of the permanent resort to these forms of hospitals, The present hospital is made strong and is a manner permanent, with a view to fully test the measure.