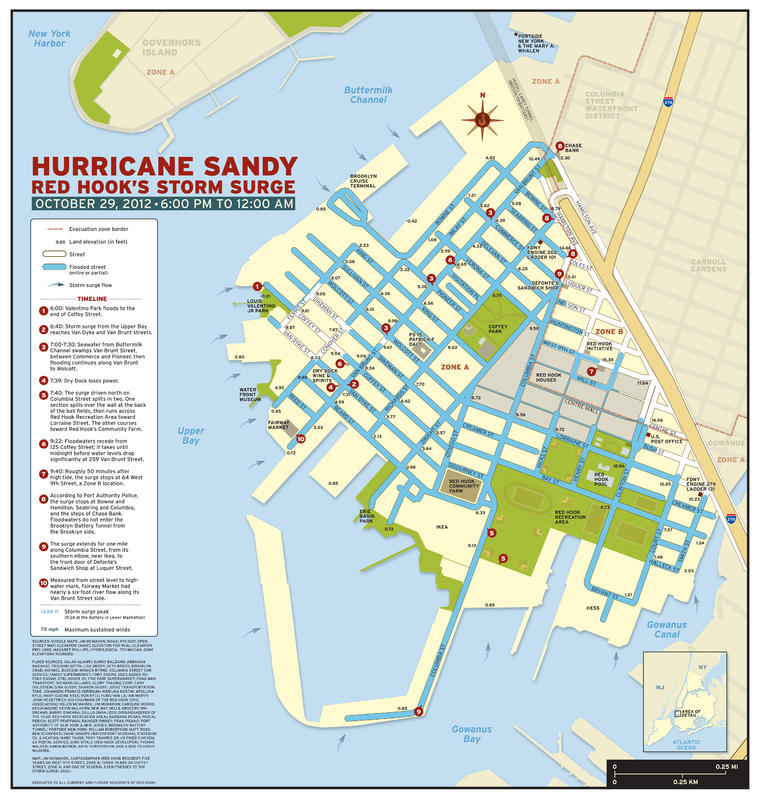 YES, post hurricane Sandy, Red Hook has been, and still is being, intensely studied by the city, state and federal government; and it is being studied by many academic projects as well. Below is a quick overview of multiple government-funded plans and how they interrelate (or don't).

The NYC plans (SIRR and others) created by the Bloomberg administration were closed by the time the other plans below kicked off.

The NYS NY Rising plan brought in two of the Rebuild by Design teams to present to the committee and to the public, so there was cross talk between the State and Federal efforts with influence going both ways.

Note that HR&A, a major consulting firm, had one team working on the NY Rising plan and one team working on Rebuild by Design, which also created opportunities for cross-fertilization between the efforts.  One of the Red Hook NY Rising consultants Pippa Brashear of Parsons Brinckerhoffwas also on a Rebuild by Design team and had been involved in SIRR, so she brought a lot of experience to the process.

Details about the "$200MM Red Hook comprehensive flood" plan announced in January 2014 (or even why Red Hook was selected) were not available during the last few months of the NY Rising planning process, so the Red Hook NY Rising committee was left to guesstimate what the $200MM might cover and tried to avoid redundancies in what we proposed in our own plan.  We also requested that the goals and values expressed in our NY Rising plan be considered by the creators of the $200MM plan and that they also meet with our NY Rising committee.

The Brooklyn Greenway Initiative (BGI) has developed storm water management plans over the years.  Here is a 48-page study for such a plan inGreenpoint.  After Sandy, BGI created a concept for a resiliency barrier made by elevating the Greenway itself (one of many plans here).  BGI presented that concept to Red Hook as part of the NY Rising committee and are clearly being consulted by the other plans below. They also applied for a grant to raise the Greenway in Sunset Park.

The Port Authority of New York & New Jersey has been studying possibilities for beneficial use of non-hazardous dredge material (the mud removed to keep shipping channels deep enough), a study process that began years before Sandy. Given Sandy's impact, they refocused the study to look for ways to see how in-water structures composed of dredge material could be used for wave mitigation and storm protection. They are looking at doing a pilot project in Red Hook on Greg O'Connell's property to test the concepts. Their consultant Bonnie Harken of Nautilus International updated the NY Rising committee on May 28, 2014.

January 2014, Vice President Biden and Governor Cuomo announced that the State and the City would create a $200 million "first in the nation" flood management system for Red Hook as part of "Reimagining New York for a New Reality." In early 2015, it came out that only $100MM is available for the "IFPS" (Integrated Flood Protection System) being planned by the NYC EDC. The gap of $100MM and change of budget without community notification has caused a lot of consternation and funding and design response to that news is not finalized as of June 2016. 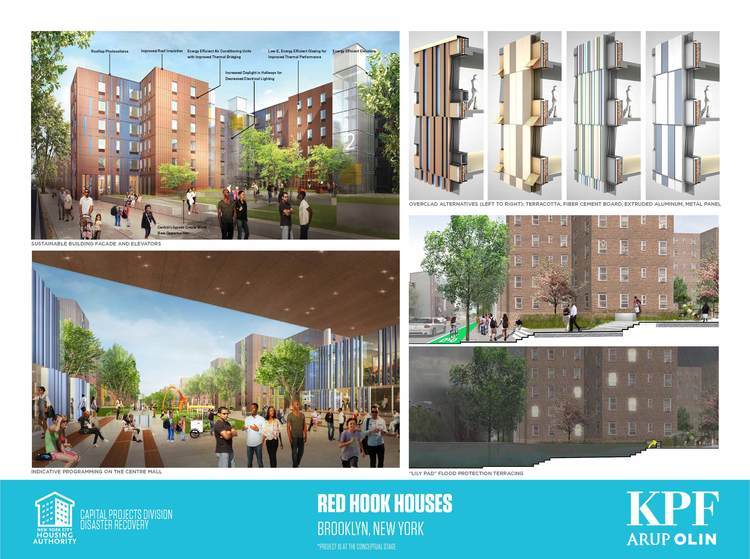 Ongoing work comes out of the Mayor's Office of Recovery & Resiliency

NYCHA (the NYC Housing Authority which runs public housing) is planning extensive resiliency upgrades for the Red Hook Houses East and Red Hook Houses West development. One of the projects will change Red Hook for everyone, not just for the residents of NYCHA housing (see one page of a 2016 presentation at right, and the full PDF in this link).

NYS created the NY Rising "Community Reconstruction Program" (CRP), an 8-month planning process, for 43 areas in the state, including Red Hook, affected by storms Sandy, Irene and Lee.  $3MM in federal funding was allocated to Red Hook's plan.  Red Hook, like the other the 43 areas, had to create a plan for the allocated funds by having a state-selected committee of community members work with, and be a liaison between, the community and state-hired consultants.  The committee met every two weeks and had multiple public engagement events.

PortSide's President Carolina Salguero was on the Red Hook Committee.  Her contributions to Red Hook's final NY Rising plan were to propose the solar-powered emergency lights for NYCHA houses, research into a proposed Atlantic Basin ferry, several proposals to encourage greater east-west movement and cohesion within the Red Hook neighborhood, and considerable research into waterfront policy and many proposals for waterfront activation (see links 1-4 under NY Rising Background documents below). 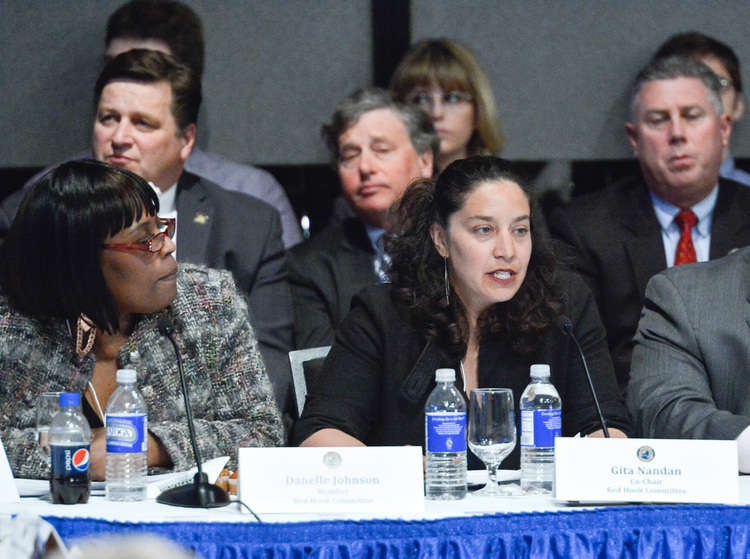 The US Dept. of Housing and Urban Development (HUD), with the support of several foundations, ran Rebuild by Design, a planning process via an international design competition. Our Director Carolina Salguero was on a September 2013 panel and tour which introduced Rebuild by Design to Red Hook.

Links to Rebuild by Design plans that included Red Hook at the draft stage. By the final plan, BIG had dropped Red Hook to focus on Manhattan.

The two teams focusing on Red Hook were brought in by the NYS NY Rising process to present to the committee and to the public, so there was cross talk between the State and Federal efforts with influence going both ways (see summary at top for more about cross fertilization).

As of a June 2, 2014 Rebuild by Design announcement, the team working on Red Hook led by HR&A and Cooper Robertson was NOT selected as a finalist for funding, but their ideas are worth understanding and exploring.  (The HUD version of that announcement here.)  They HR&A-led team focusing on Red Hook stressed economic resiliency and how to make the small business sector more resilient.  As a part of this, they proposed adding new structures in the NYCHA footprint to add retail to activate street life.  As an example of plan cross talk, when that idea was presented to the NY Rising committee, our Carolina Salguero asked if those new spaces could include some of the activities that the NY Rising committee was hoping to incubate in Red Hook.

There were striking additions and changes in the last few weeks of their plan, which finished in late April right before the NYS NY Rising process.

A notable late-in-the-game addition was a barrier seawall (two next images below) which would create a protected cove along Red Hook's SW shore with park space on top of it. Sea gates (indicated by rows of black dots in the rendering) would allow vessels to come and go under normal (non-flood) conditions.  The gates would be closed in the event of a storm. 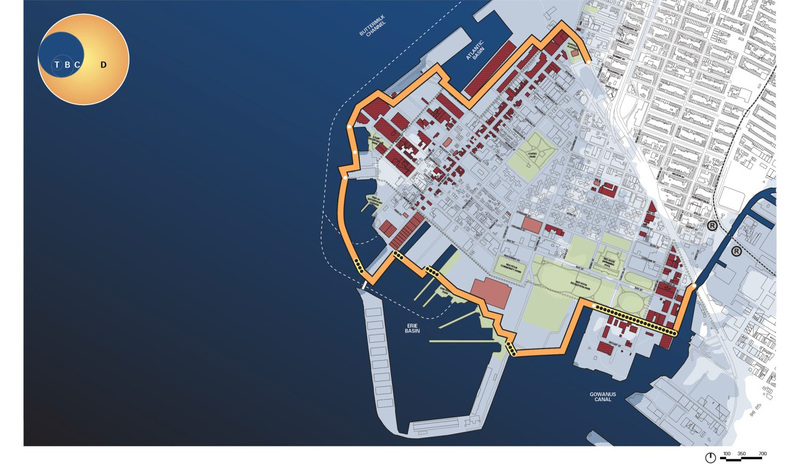 Rebuild by design plan by HR&A Coopers Robertson put a storm barrier (orange) around red hook, but allowed vessels to use the protected waterspace this created by adding storm gates (where black dots are located). We propose some tinkering: that a gate be added at Valentino park and a gate be added at north end of cove opposite Greg O'Connell's property and that the barrier move offshore opposite Brian Robbins building so that property has a usable, protect waterspace too.

This proposal could align with a Port Authority-funded Dredge Materials & Climate Change study (mentioned at top) being done to find beneficial ways to turn non-toxic dredge material into a resiliency asset. 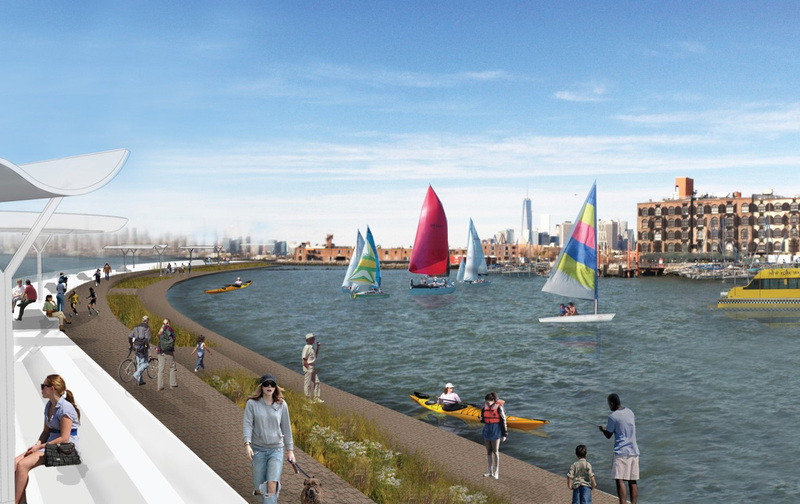 The rest of the proposed barrier wends its way just inland of the waterfront. Compare this concept to: 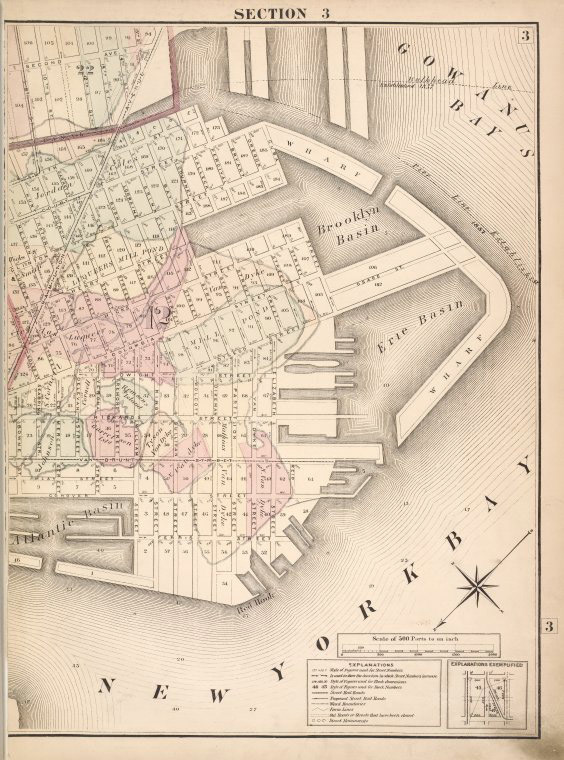 1874 Proposal of An Enclosed Brooklyn Basin

3. The Proposed Breakwater in the 1921 black and white rendering at right was not built at all. Both historic illustrations reveal that the effort to protect shore from the sea is not totally new. 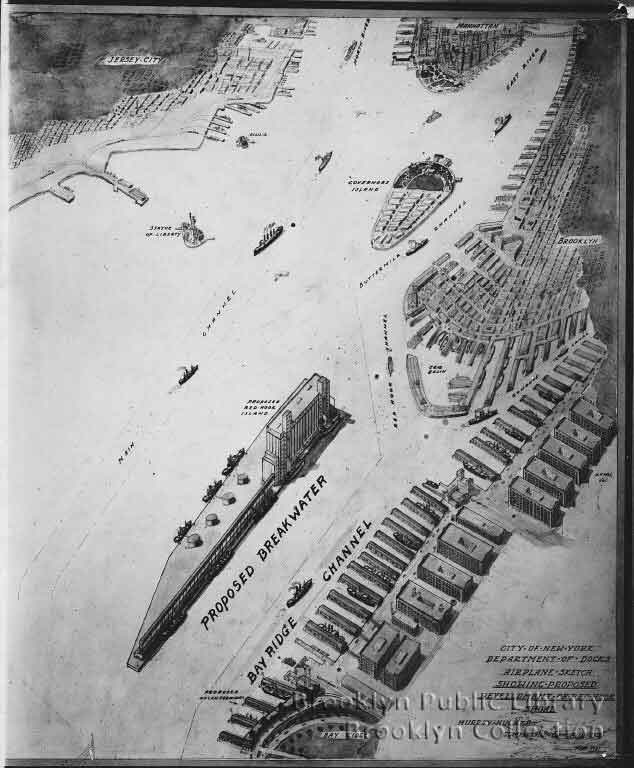 Protection from the sea is not an entirely new business in town.

There was a large Brooklyn resiliency effort of 1888 when the 460-foot-long Brighton Beach Hotel (left) was moved more than 500 feet back from the Atlantic Ocean to get away from shoreline erosion.

The hotel was loaded onto 112 trucks pulled by 6 train locomotives. 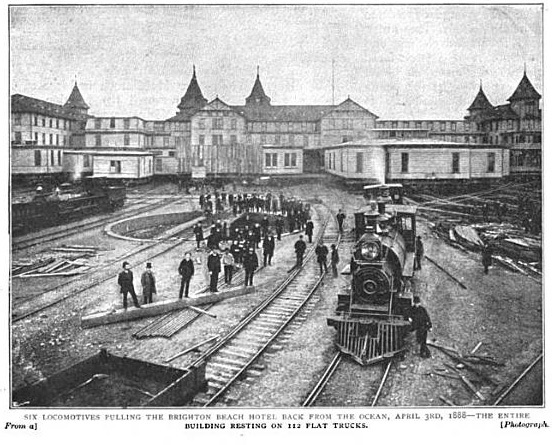