Wandering cows?  Jostled milk? How did Buttermilk Channel, the water between Red Hook and Governor's Island, get its name? Contemporary explanations usually fall into two camps. We found an older one.

1) Dairy farmers shipped their milk to Manhattan over this channel by boat,and the water was so rough that the milk was churned to butter en route or 2) before the channel was deepened, at low tide, cows walked over the flats to graze on Governor's Island. 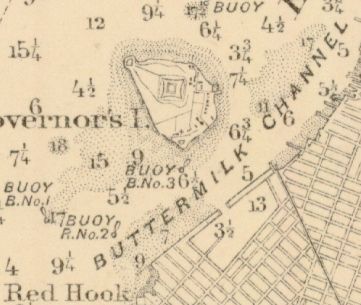 Our historian Peter Rothenberg dug into history and reports this explanation:

Historian Henry Stiles writing in 1867 notes that, "In the year 1824, Gabriel Furman, a native of the town, published a little volume which he modestly entitled Notes on the History of Brooklyn, and which, for that day, possessed great merit as a local history."

Stiles also notes, “Furman’s Notes mentions that it is ‘an established fact,’ and is followed by subsequent historians of Long Island, Buttermilk Channel is so called, undoubtedly, from the abundant white foam on the water, in a part of the channel where the tide of the East River, passing through the channel, meets that of the North River.”