The Red Hook Grain Terminal, is a large cement structure, erected by New York State in 1922.

It's purpose was to store grain arriving from the Erie Canal. Located at the foot of Columbia Street, at the mouth of the Gowanus Canal, the 54-bin reinforced concrete structure was designed by The Office of the State Engineer. 16 months is what it took to complete the project, just 13 days for the pouring of concrete for the 90-foot-high silos.  The cost of the 429-foot-long grain elevator was $2.5 million.

The grain from barges were drawn up, i.e. elevated, by booms into the building where it was washed, dried, and stored. A 1,221-foot-long conveyor transported grain to freighters tied up an adjacent pier. 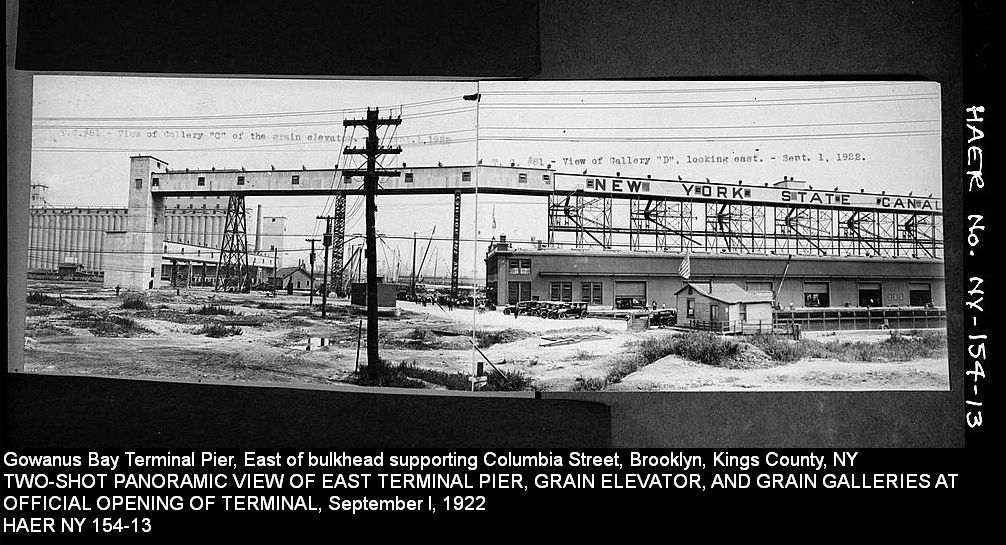 The Brooklyn Daily Eagle reported in the days leading up to opening of the Grain Elevator, August 27, 1922 that:

"Heretofor it has been necessary often upon arrival in New York, to leave a shipment of grain in the bargees for lack of space. As most of this grain is for export, there was a waiste of time before it could be loaded aboard an outgoing vessel, and demurrage charges mounted, up. These delays will be eliminated by the use of the now elevator of 2,000,000 bushels capacity, so that more grain can be brought through from the West at a reduced cost."

It was hopped the massive terminal would revitalize the shipment of grain along the state's water routes - the barge canal system - but the amount coming into Red Hook continued to decline.

According to a 1996 New York Times article, the decline in the number of  barges shipping grain down the Erie Canal was in part caused by a monopoly of grain elevators - used to unload, store and load grain from vessels - by railroads, which denied priviledges to barge operators, in the early years of the 1900s.  This had not ben the case in the previous century.

The Port Authority of New York and New Jersey took over it's operation from New York in 1944, and decommissioned it in 1965. It is now owned by GBX.