Please enable JavaScript in your browser settings.
"If the tugboat chef does please his audience, he always stands a chance of taking a fast, unexpected swim" 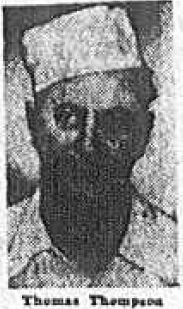 “I am allocated $10.05 per day to feed six men, three meals apiece, or a total of 18 meals daily,” Thompson explains. His favorite recipes include Swedish meatballs and barbecued spareribs.

See the full article for the recipes.

Harbor Lights By JEANNE TOOMEY (Miss Toomey is on vacation. Her guest columnist today is Thomas Thompson, cook aboard the Datzellera, sensational new tugboat equipped with the controllable pitch propeller and owned by the Dalzell Towing Company.)

CAREER—I have been working on tugs for seven years, two years for Dalzell and before that with Dauntless and Bouchard. Before cooking on tugboats I worked in restaurants and bars. My qualifications, like those of most tug cooks, include being able to buy or market for grub as well as being a cook. I buy from various markets ashore. This is a single crew boat.  I am allocated $10.05 per day to feed six men, three meals apiece, or a total of 18 meals daily. And unlike housewives, if the tugboat chef does please his audience, he always stands a chance of taking a fast, unexpected swim.

FAVORITES – Seriously the men would not throw me overboard, but they would complain to the company and I’d find myself looking for a new job if the menu was insufficient or not appetizing.  My favorite recipes include Swedish meatballs and barbecued spareribs. I learned to cook the latter in Texas. Like most cooks, masculine or feminine, I know what I do, but it is hard to write it down.  However, here goes barbecued spareribs.

RECIPE — Take one onion, two stalks of celery, one green pepper and grind in chopper. Add a teaspoonful of salt-and a half teaspoon of pepper to a small can of tomato puree and a third of a bottle of Worcestershire sauce. Parboil the spareribs. For six men, I require five pounds. Take some of the water from the meat and put in the above contents to simmer. The spareribs go into the baking pan after the mixed ingredients have cooked for half an hour. Put the mixture on top of the spareribs and let it bake, basting with sauce on top, for one hour and a half.

The crew loves it and I hope some of the readers will, too, if they can figure out my directions.

STANDARDS—You can't be a dirty cook or a greasy cook on a tugboat. The men are good eaters and they know good food. They insist upon cleanliness and non-greasy cooking. They really are very, very fussy eaters, if the truth were known. I was born In Norway and when I came to the U. S. A. settled in Bay Ridge. I learned to cook working in restaurants and then drifted towards the harbor. Coal boats are the toughest to cook on. There's more soot around. It's clean on a Diesel tug—hence, much easier to work on.

SOME MENUS — For breakfast I serve cereal and either bacon and eggs, wheatcakes, or sausages and eggs, as well as coffee, toast and fruit juice.

I bake occasionally though you do more baking on a double crew tug. l make lemon meringue and apple pie—strawberry shortcake and my own puddings.

The crew is very fond of any dessert. In fact they're just fond of food.

SWEDISH MEATBALLS — All Scandinavians have their own versions of Swedish meat balls, but I would like to give you mine.

Get one and a half pounds of chuck steak ground together with half a pound of pork.  Add to this a ground onion, three slices of crumbed bread and in to this knead two eggs.  Add a half a whole nutmeg and a teaspoon and a half of salt and one teaspoon of pepper. Work the meat in with the bread, eggs and other ingredients and brown ‘em fast in butter in a frying pan.  Put on the side until you finish making the gravy. When you have finished the gravy, put the meatballs in the gravy and let simmer for three-quarters of an hour.

HOMEWORK—I am married and have three boys. Richard, 6 and Thomas 6 months.  My wife Jane does most of the cooking at home, but I give her a hand when we have company.